dabbling in something new...

dabbling in something new..., originally uploaded by Jhascrapmom.
earlier this month i got to do something new and exciting ( for me )...i had the opportunity to take some photos for a magazine article.
my friends janet and joy are known as the moggit girls in the design blogging world, chronicling the fugly aspect of design;). 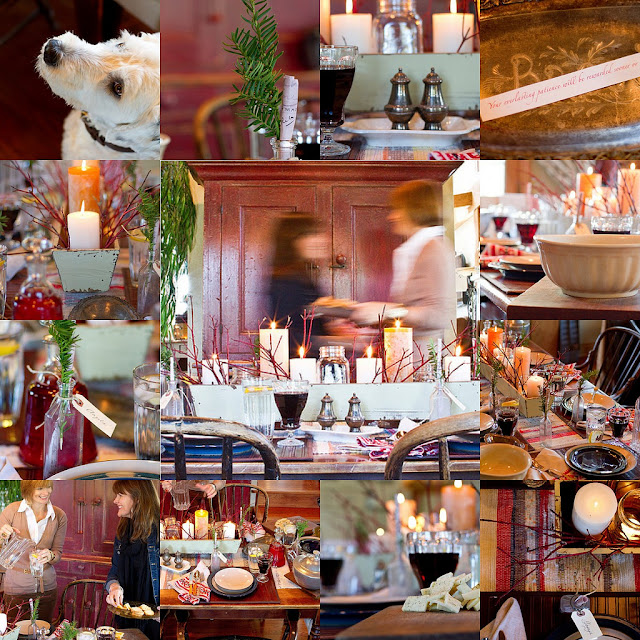 they have also, through their irrepressible charm and hard work, had the chance to become friendly with nate berkus and appear on his show as well as on the OWN (oprah winfrey network ).

most recently, they are also playing the role of the "quick pick chix" for dabble magazine, a canadian online magazine, headed by kimberly seldon and a group of very savvy design, travel and food types.

and this is where i came in:).

janet and joy needed a few photos of a wintery table setting for their upcoming column...and i was happy to oblige.

seeing how a scene is set for a magazine article was enlightening! i walked in their home and was greeted with old quebec city in the kitchen and christmas in the living room ( they were also being photographed by another publicaton the same day!)

that middle shot?
my favourite:).

and the one where we realized that we would likely no longer be eating the cheese so wonderfully displayed on it, as it took me long enough to get it right:). the girls were non plussed, being video pros and accustomed to retakes and were enthusiastic to oblige!
i was determined to get the right amount of happy blur...

in the final edit, their article ended up covering pages 31-33 in the most recent issue of dabble...
a little more than i thought and a very welcome surprise!

so, thank you girls for the fun, the cheese ( pre shoot ) and the experience.
and congrats on your continued success...looking forward to what comes next!

many of the photos that appear here did not appear in the article.
like my happy blur one.
but i needed to include the dog.
i mean, really?
look at him.
Posted by angela auclair

We love Wilbur! ;)
Thanks again Ang for all of your hard work - we so appreciate it!!
xo
J&J